Convenor’s report was read out by Sue Pilgrim. 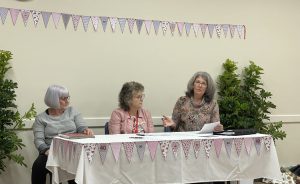 Flowers were presented to Sue as a thankyou for navigating us through a difficult Covid year. The ”new” Convenor for 2022, Sue, welcomed her committee. 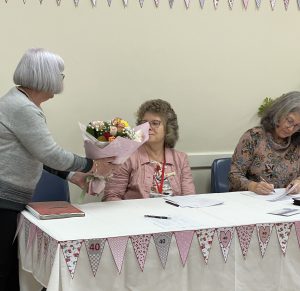 Congratulations to Karen Matthews winning the Marjorie Horwood Award for Quilting excellence, for her beautiful interpretation of the Caswell Quilt. This award was voted by the members of Cherrybrook Quilters. 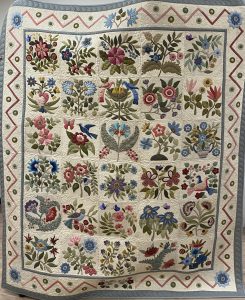 Congratulations to the joint winners of the Margaret Goldman Award for Needlework Excellence Rosemary Walker and Dawn Perrin. Rosemary presented a beautifully smocked and embroidered Christening Gown and Dawn presented an intricate 3D passionfruit flower. This award was voted by the members of Cherrybrook Quilters.

This is CQI’s 40th year and we marked occasion with a small celebration on the night. A HUGE thanks to Annie who made all the decorations. They were spectacular. From the flower arch to the 40metres bunting, the huge greenery freshly cut from her garden to the chocolate boxes, she out did herself. It was very much appreciated.

Thanks to Bronwyn for organising the anniversary Cake, making another gluten free one and for bringing memories in albums for us to peruse. As Bronwyn is the longest standing member it was only fitting that she cut the cake. Bronwyn also read out a letter from Val Moore who was instrumental in creating the group all those years ago! 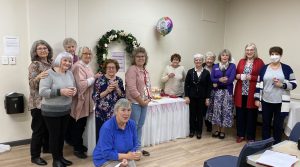 Beautiful lavender pouches made by Rosemary with Liberty fabric for her friend’s birthday. 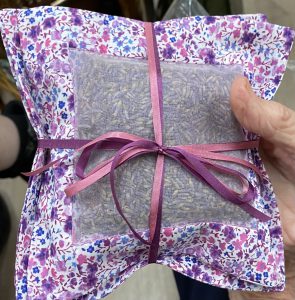 Julie-Ann showed us her works in progress. The first quilt is a pattern by Laundry Basket quilts and was started at our weekend away last June, just one border to go. The second quilt is an adapted pattern by Craft with Fee with embroidery and piecing using Tilda Gardenlife fabrics. The third quilt is ‘Flowerbed’ by Sue Spargo, felted wool applique and embroidery. 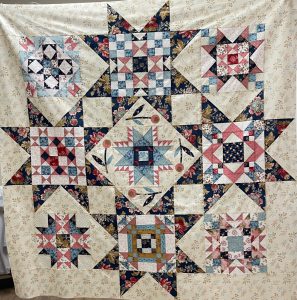 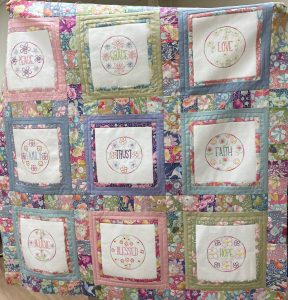 ‘Bee Mindful’ quilt, pattern by Michelle Hill’, was made by Bronwyn and was an entry in the Marjorie Horwood Award for Quilting excellence award.

Modern quilt made by Sue O – entry in the Marjorie Horwood Award for Quilting excellence award. 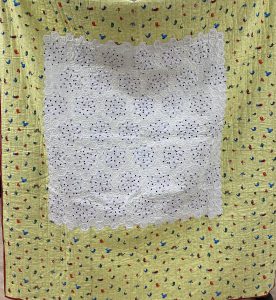