The guest speaker this month was Carolyn Pearce. Carolyn has always been fascinated by fabrics, laces, threads and buttons.  She learned to embroider ‘properly’ in the 1980s and was hooked.

Describing herself as a ‘frustrated artist’, Carolyn uses her threads as a paint box. Her favourite technique is always the one she is working on now and her ‘other love’ – the garden – provides constant inspiration for her needlework.

Carolyn has been commissioned to design many projects for Inspirations magazine and has contributed to a number of other publications.

In 2007, she was thrilled to be awarded first prize in Surface Stitchery and Best in Competition for her Doll’s House Workbox at the 50th anniversary of the Embroiderers’ Guild of NSW Gathering of the Threads exhibition. 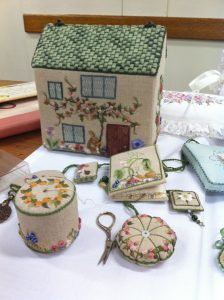 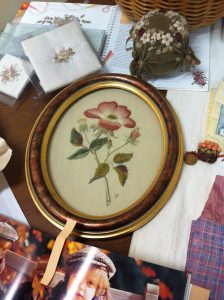 Carolyn tries not to compartmentalise embroidery techniques, so anyone piece may have silk ribbon, canvas stitches, appliqué, thread painting and stumpwork.

Lynne showed us her completed “Toy Shop” quilt for her youngest grandson, Merrick.