Cherrybrook Quilters was formed in February 1982 by a small group of quilters who wished to further their quilting interests and share their talent and friendship. The first meetings were held in a church hall in Cherrybrook in Sydney.

Since then, member numbers have grown, many quilts have been stitched, challenges have been met, the venue has changed and many good times have been shared.

In 1983, the first display of members work was held. The aim was to showcase the variety of talent in the group, to create a goal for completing work and to raise funds for a worthy cause in our local community. Quilts and embroidery were displayed to perfection in the lovely home of Marjorie Horwood.

Over the following years, in conjunction with The Parramatta Lantern Club, six further exhibitions were held at this venue, raising more than $100,000 for the Deaf and Blind Institute, North Rocks.

Between 1985 and 1987 Cherrybrook Quilters, with 40 members, were commissioned to make a series of large wall hangings for The Hills Shire Council, as part of Australia’s Bicentenary celebrations. Six panels were designed by local graphic artist Graham Wade, each focusing on a different aspect of the shire, including the people, past and present, activities enjoyed in the shire, significant buildings, transport, flora and fauna. More than 3000 hours of stitching, a great variety of fabrics, threads and techniques were used, to complete the panels. For this contribution to bicentenary celebrations, Cherrybrook Quilters were awarded a silver medallion by The Australian Womens’ Weekly in their “Women Celebrate 88” programme. 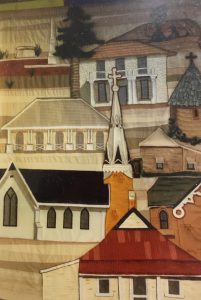 Member’s creativity and beautiful work continues to be displayed at exhibitions or other events. Proceeds of exhibitions and fundraising events have been donated to a variety of causes, latest being The Bill Walsh Translational Cancer Research Laboratory. Also quilts have been donated to many charities including Bear Cottage, part of the Sydney Children’s Hospital and Ronald McDonald House.

Each year a programme is planned for the year. The programme includes demonstrations, workshops and guest speakers. A weekend retreat at Ferndale is enjoyed by those members who are able to join in. The Convenor and the committee work hard to ensure the meetings and activities are interesting and enjoyable.

In the last few years the convenor has set a “convenors challenge”, designed to take members ‘out of their comfort zone’. Many amazing interpretations of the ‘challenge’ have resulted.

In 1993 the inaugural “Marjorie Horwood Award for Quilting Excellence” was presented. Each year since, at the December meeting, members vote for a quilt displaying outstanding workmanship. Also in 1993, Valmai Moore was awarded Life Membership for her contribution to Cherrybrook Quilters since its inception. In 2014 Marilyn Horwood was awarded Honourary Membership for her service to Cherrybrook Quilters’.

In 2018 the inaugural Margaret Goldman Award for excellence in Needlework was presented.

The original goals of the Cherrybrook Quilters remain –

To promote the art of quilting

To constantly strive for excellence in all our endeavours

To create friendships through a shared interest